Does anybody really know what time it is? 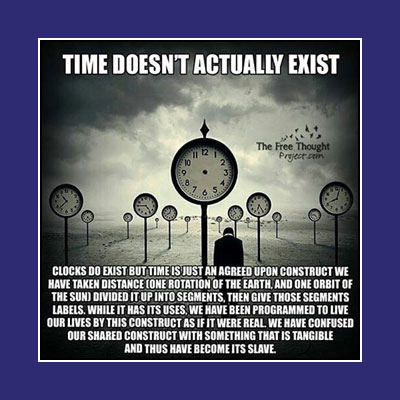 I always try to control time because I feel time has held me captive my whole life. Since a very young age, I set clocks ahead because somehow I would feel pressured by time. I resented that pressure and to some extent I still do.  I also never knew which of my timepieces was ahead or by how much. Maybe my car clock was ahead by 13 minutes and my watch by 8 minutes.   I set digital alarms to times ending in numbers I felt sorry for like 6:43 or 2:37. I think the whole concept of picking times to do things that end in zeros or fives is overrated.  My friends and family started asking me what time is it really?  I thought that was such an odd question. It was really no time at all. I don’t believe it exists.

At work, I was asked to spend a certain amount of time with a certain number of people for a specific sum of time daily, monthly, quarterly and yearly. The time I was given for vacation, illness or personal matters was subtracted from the time I spent with my patient,  so I had to “make up time.” What the hell does that mean?  Patients would tell me they needed more of my time.  I wondered who or what I would steal that extra time from and how does one steal time.

People have fascinating interactions with time. Many got angry when I was not on time.  I was amazed that they allowed time to dictate their emotions. I still cannot wrap my brain around why we “tell time.”  What do we say?  By the time you state the numbers on a clock, those numbers are no longer accurate.   I wasn’t sure that time was something to be given to others. Then I heard people say things like, “I’m sorry I took so much of your time; as if I wasn’t looking when they took it and now they were confessing. Is this how you steal time?

I have been told I have time blindness. At first, I thought this was good because like my dyslexia I had a name for this phenomenon. Ultimately this led me to believe that something was wrong with my brain because I cannot conceptualize time or calculate time like others. Honestly, I do not believe in time.  When someone asks me if I have time to do something next Tuesday, I have difficulty truly understanding what that means.  In my world time doesn’t pass; time is never up and there certainly are no time outs.  To me, “a good time” is 3:33 or 11:11 because I like those numbers and feel aligned with the Universe when I see them.  When someone asks if I have the time, I’m never sure what to say. Not too long ago I thought of telling someone, “No, I don’t have the time.  It was stolen from me.”

Knowing I need to learn how to talk about time and navigate around this foreign construct, I decided to research the definition. I stopped researching after discovering 40 differently worded definitions.  This led me to the conclusion that maybe everyone else who so casually is controlled by, angered by, relieved by, or motivated by time are the ones that are blind and not me.  How could there be so many definitions across disciplines and contexts? How could one simple sounding word encompass so many parts of speech?

I have compiled a list of my personal favorites.

a certain period during which something is done (Medical Dictionary)

the indefinite continued progress of existence and events in the past, present and future regarded as a whole (Oxford Dictionary)

the measured or measurable period during which an action, process or condition exists or continues (Webster’s Collegiate Dictionary)

My favorite definition is that time is what prevents everything from happening at once (physicist John Wheeler and others). This fabulously proves my point. Time does not exist because everything IS happening at once. Time is an illusion.  I decided to study Dr. Wheeler some more and learned that he and many scientists believe there is a difference between earth time and space time. Wheeler states, “Spacetime tells matter how to move; matter tells spacetime how to curve.”  What?!

This is starting to sound like quantum physics. Hmmm. Of course I had to research more about quantum physics and time and learned that the quantum concept of time was invented by physicist Bryce DeWitt in the 1960s. He posited that “Different times are special cases of different universes.” It gets even better the farther you delve into time. In 2013, Ekaterina Moreva, together with Giorgio Brida, Marco Gramegna, Vittorio Giovannetti, Lorenzo Maccone, and Marco Genovese confirmed that time is an emergent phenomenon for internal observers but absent for external observers of the universe.

Different universes; internal observers; external observers?!? Of course, I decided that this again proves my point.  Everything is happening all in the now on Earth, and in another universe things are happening in the past or the future which is actually now for us here in this universe.  Thus time is an illusion. Therefore I cannot be blind to something that does not exist.